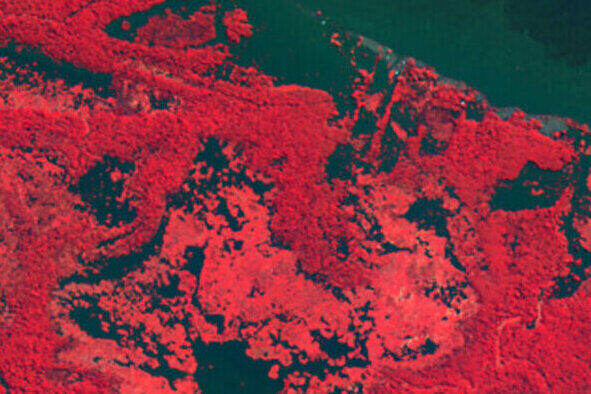 «An  unprecedented scientific effort to LiDAR scan the entire surface of the Earth before it’s too late» – that is how Christopher Fisher, founder of the Archive Earth project, describes his recent initiative. The goal of the project is to record the current state of the planet in the face of ongoing climate change and urbanization.

By scanning the Earth’s surface with a high resolution LiDAR, the Earth Archive is creating a true 3D twin of our world, an open source digital record of the earth that will reflect the landscape exactly as it was at the time of the scan. Through these efforts, the Earth Archive can provide geospatial data that will serve as a foundation for understanding and preserving our world.

Anxiety for the future of the planet is the main emotion behind the project. «We’ve already lost 50% of the world’s rainforests. We’re losing 18 million acres of forest each year. Rising sea levels will make whole cities, countries, and continents unrecognizable. Unless we have a record of these places, no one in the future will even know they existed». The authors of the project seem to be convinced that it is already too late for the current generation to think about how to stop the consequences of the climate crisis. The Earth Archive is primarily positioned as a way to record the current state of the planet so that future generations can compare “before” and “after” and take steps to restore the cultural and ecological heritage of the Earth.

“While our scope is the entire planet, we’ve tasked ourselves with first scanning areas that are not only most susceptible to change, but also deep in value for understanding our past» – that is how the authors explain the reason behind choosing to start Earth Archive from the Amazon Basin. Elsewhere Christopher Fisher expounds: «The Amazon rainforest plays a crucial role in the Earth’s climate. However, few people are aware it has an incredibly rich indigenous history. On top of this, this region boasts a remarkable level of ecological diversity. Sadly, we see it vanishing before our eyes». Despite the importance of the Amazon for the global ecology, this region remains largely underexplored in terms of cartography and modelling. That is why scanning the Amazon Basin was the main agenda of the first congress of the Earth Archive, which was held in a virtual format in June 2021. The purpose of the congress was to bring together as many people as possible (researchers, students, non-governmental organizations, businesses, indigenous groups, government officials and corporations) to work together on this ambitious project. The start of the first phase of the project was scheduled for late 2021 – early 2022.

Another important driver of the project is the archaeological and anthropological interest. As an anthropology professor, Christopher Fisher is convinced that full earth scans, especially in little-studied areas like the Amazon basin, can provide a lot of useful new data about these places. «One interesting thing for me as an archaeologist is that we will be able to demonstrate how densely settled the Amazon was at the time of contact and how humanized the landscape was. This is a major question in the prehistory of the region, and it’s something that we can help elucidate», Fisher says. At the moment, the main difficulty of the project is its high costs, as well as the need for extensive coordination. At the moment, the main financial source of the Earth Archive is donations, which can be left on the project website. Of course, the Covid-19 pandemic also poses natural limitations on long-term planning.