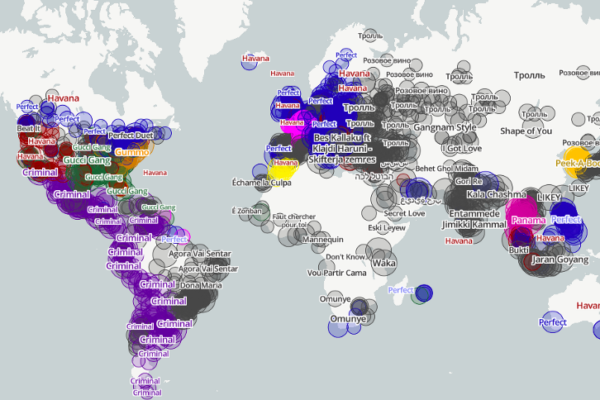 Just like any element of culture, music has both temporal and spatial dimensions. Today we can distinguish a number of cases of successful and productive use of geoinformation technologies in the musical domain.

American journalist Mat Daniels has created an ambitious visual map of cultural musical preferences Music Borders. His idea was to see how music maps our world. There are no countries on his map, but only regions united by musical preferences, which do not always coincide with the borders of states. Based on YouTube traffic analysis, Daniels identified the most popular songs for each city and put that information into the Mapbox platform. On the website we can see the most popular songs in any US state or region of Russia for a month. For example, when analysing data for June 2021 (unfortunately, the website was not updated after), a few interesting observations can be made. First, despite its size and cultural differentiation, Russia is rather monolithic in musical preferences. Every region of the country demonstrate the primacy of the song “Khabib – Yagodka Malinka”. The same song is leading in some regions of Kazakhstan, in Belarus and Latvia. In contrast to Russia, the United States of America is much more differentiated musically. According to Music Borders, in terms of musical preferences Texas belongs to Central America, which in June 2021 almost unanimously listened to the song “Ciudad Juarez – Botella Tras Botella”. Otherwise, it is rather difficult to identify any regional patterns. In addition to being just an interesting cultural experience, the development of such instruments can also be used commercially to ascertain musical preferences and, for example, schedule touring.

Another American researcher Stan Renard, using GIS, mapped the so-called musical landscape of the US city of San Antonio. To do this, he analysed the spatial data of the city into five categories: (1) music

venues, clubs and bars, (2) music festivals (3) music-related businesses (recording studios, music stores, etc.), (4) musical nonprofits, (5) music-centric educational organisations. This data was processed with GIS software and used to analyse trends in the development of the entertainment industry in San Antonio. Thus, the researcher noticed a number of interesting correlations, for example, a significant interdependence between musical educational organisations and other activities in the city, or the interdependence of the concentration of the latter with the sale of alcohol.

In addition, GIS is also used for quite applied tasks. For example, some music festivals use geographic information tools for infrastructure planning. Large music events require a lot of coordination in order to provide comfortable and safe support for visitors with everything from toilets and food stalls to health posts and entry/exit areas. Timmons Group describes in details the work with ArcGIS tools to integrate high-precision GPS information to accompany the Richmond Jazz and Music festival. Updating information in real time allow them to coordinate their work and make the necessary changes. 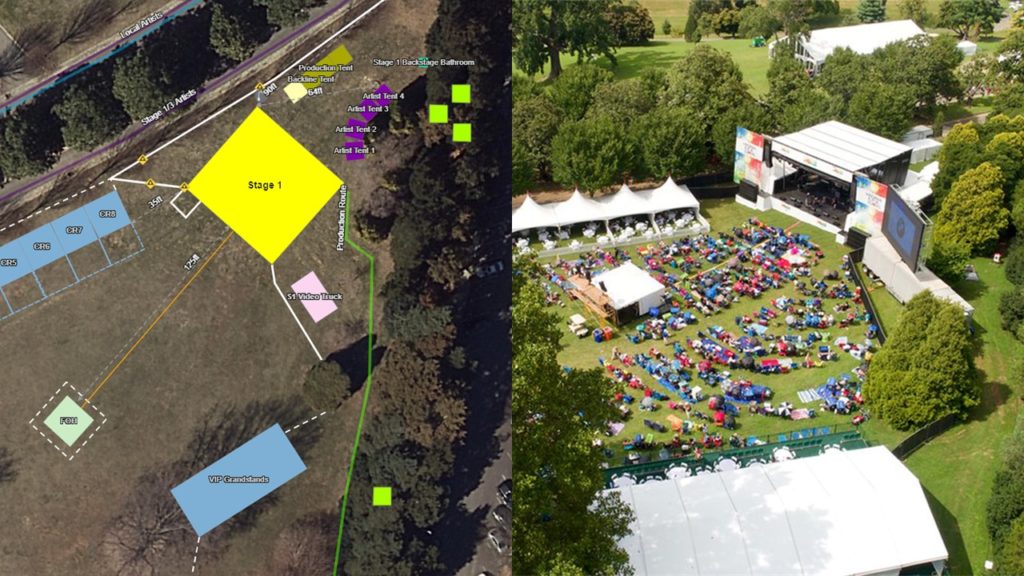 These examples are just a drop in the ocean of the opportunities that geospatial technologies are demonstrating for exploration and practical organising of musical activities. In addition, they once again show the importance of interdisciplinary approach in the humanities. For researchers and (to a lesser extent) practicing musicians, knowledge of the basics of spatial analysis opens up new perspectives and it is something that will have to be dealt with on an ever larger scale in the future.